Congrats to Tom and Denise, who had a baby girl Friday evening! Tom is my cousin in northern Minnesota.

Small World Dept: David Theig from Grand Forks has inlaws in my hometown.

We've been trying out our new Avent breast pump. Sometime I'm going to have to be able to feed Christopher when Mama's not here!

Bill Gates took time off from Davos to appear Saturday evening on Wetten Dass, a talk/game show that is the highest rated German TV show. He looked uncomfortable between Naomi Campbell and Pamela Anderson. The ZDF network is a partner of Microsoft.

The storm made a lot of noise last night, with winds up to 90 mph. Flooding on the coast was 'nothing unusual', but the next high tide at 11 am might also bring flooding. The Sunday morning 'Fischmarkt' has been cancelled. 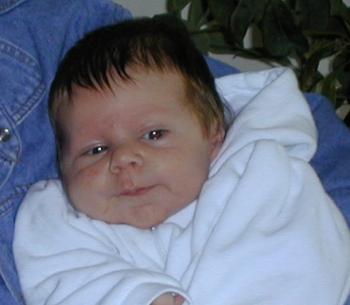