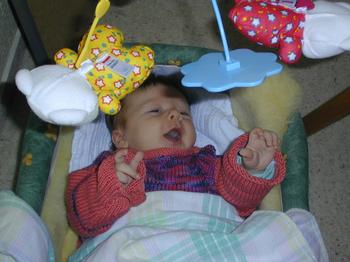 It's the usual story. It's the weekend, and Christopher is in a much better mood than either of us. It's 8:30am, he's just had breakfast, and he's babbling and gurgling happily at his Fisher Price Teddy Bear mobile.

He laughs and smiles (toothlessly) at everything he sees. When he's especially pleased, he goes into a 'full body smile', in which he throws back his head, waves his arms, and kicks up his legs.

He's always slept well during the night, 4 hours at a stretch, but the last two nights he's slept through from 11pm to 5am. We're hoping that's a new trend.

Previous Post: Hippo Day Next Post: Why are they doing road repair on both my routes to work?!?
comments powered by Disqus