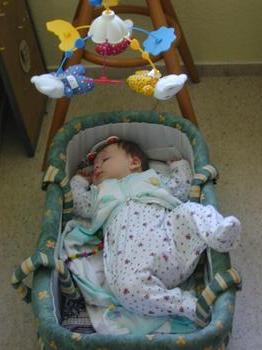 State elections in NRW today, down where Andrea and André live. Unlike February's election in Schleswig-Holstein, which all 4 national parties could claim at least a small victory, in today all parties except the Free Democrats were clear losers. (The CDU's somewhat racist slogan 'Kinder statt nder' ('Children instead of Indians') against the 'green card' program for computer specialists was thankfully a flop, I guess since neither children nor Indians could vote.)

Anyone who wants to understand Europe needs to first understand the annual Eurovision Song Contest (warning: this website reaches out and bites your browser), held last night in Stockholm. It's hokey, it's kitschy, it's lowest common denominator entertainment, even more so now that the TV audience throughout Europe can call in and vote. We missed it, though. I hear Denmark won, and that Germany's Stefan Raab with Wadda hadda dudde da (30 s Real Player sample) came in 5th.

Another step on the road to European Zen would the the UEFA European Football Championships. That's coming up next month in Holland and Belgium. Germany will be lucky to do as well here as Stefan Raab did in Stockholm.