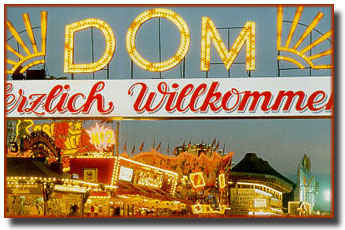 Earlier this week, Andrea took us to the Dom in Cologne. This is the Dom in Hamburg, which is not a cathedral, but instead the biggest carnival in northern Europe, running 3 times a year for 4 weeks at a time. The summer Dom starts next Friday. It's located on the Heiligengeistfeld, just behind my office building. They already started assembling the giant ferris wheel last week, which we can watch from our Marketing
department.

The name Dom is an historical play on words. The carnival started in the 10th century as a church market. The church itself burned down in 1803, but the name has stuck.

The Dom is pretty much like the midways at the state or county fairs in Minnesota or Iowa, but without the animals.