The Internet might be banned from the Sydney Olympics, but here you'll contninue to receive full coverage of Christopher. Here are the latest headlines.

Bigger car seat Over the weekend we tested the toddler car seat, which is higher and faces the front. Christopher is just big enough for it, and enjoyed the better view.

His own luggage Inquiries at Northwest/KLM revealed that Christopher is entitled to 10 kg of his own luggage, including a EU-approved car seat.

Doing the crawl A colleague told me that babies go through 7 stages before finally learning to crawl. Christopher must be on about stage 4. He slides on his belly, keeps one arm to his chest, and somehow manages to move forward. He's actually quite quick, and can now move and see where he is going at the same time. This makes him now a real threat for the cats. 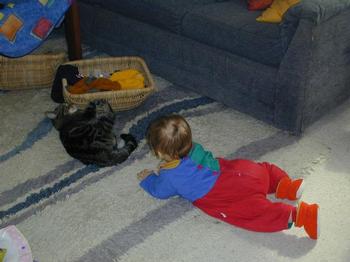