My folks sent an E-Mail from Florida via my cousin, who "joined us on Friday just in time to go to the Twins game. They lost,
but Kirby was there and was recognized for being in the Baseball Hall Of Fame." Whoa. We we no idea. We were preoccupied with Christopher in January, and the news didn't make the German Tagesschau. 17 Jan 2001, CNNSI: Puckett gets highest honor in the game he loves.

In the 80's we lived in South Minneapolis within biking distance of the Metrodome, and took in dozens of Twins games, usually behind Kirby in the center field bleachers. In the fall of 1987, two events for us both personally changed our lives forever. It was coincidence that Kirby and the Twins won the World Series that fall, and I've always associated the turning point in our lives with that World Series.

In 1991, we were in Hamburg, there was no Internet for normal folks yet, and I followed the Series the best I could on CompuServe and the International Edition of USA Today. We flew to Spain for vacation the weekend of the final games, and I learned that the Twins won the 7th game via Voice of America on a shortwave transistor radio.

It's a silly thing, but ever since I started using Linux 7 years ago and had to give my PC a name, it's always been named 'kirby'. When deciding names for our son, I briefly considered Kirby. At least as a middle name. 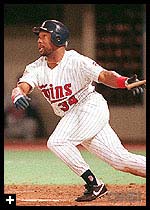