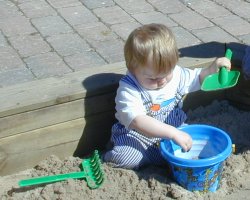 The sandbox season is now officially open. After some initial hesitation (what is this strange stuff on my toes?!?), Christopher spent nearly two hours on his first visit to his sandbox. We had to shake him out afterwards, and his nap schedule was totally ruined. 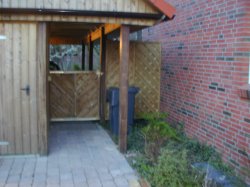 Meanwhile my father, who is much more handy than I, is working on various projects on our patio (I try to help, but end up mostly watching). He's put up a wall and gate between the patio and house as 'Christopher protection' (as much to protect the outside world from Christopher as vice versa), and we're now looking at the drainage from the patio itself. Well, right now it doesn't drain so much as seep, very slowly. 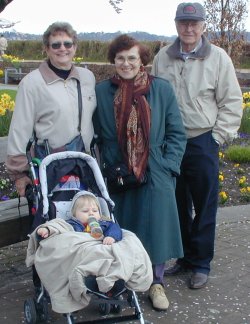 Yesterday was the annual grandparent summit in Eckernförde, a family event second to only Christmas on our calendar. I was sick as a dog, but dragged myself to dinner and coffee. I slept through the 2-hour walk along the beach. (As for the dog sickness, I'm pretty much over it, but my Mom has it today.)