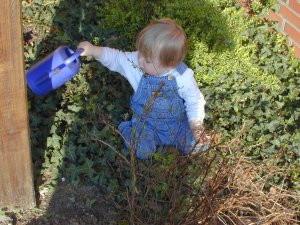 Alwin says: "Those of you with children will understand this; the younger the better..."

My folks arrived safe and sound in Minnesota. Flying back to the land of too-many-Hansons, KLM assigned them separate seats belonging to a different set of Hansons. My folks insisted on sitting together, but the only adjoining sets were in First Class. So they flew from Amsterdam to Minneapolis in First Class.

Beautiful weather all this week, and it should last through the weekend. After day care I can just unpack Christopher and let him go in the back yard. Between the rose bushes and the new gate, he's not going anywhere, and for activities he can choose between the sand box, the Bobby Car, and playing in the dirt. (Like our elementry school janitor used to say, 'Get out of the doit before you get hoit!')

My web server upgrade to FreeBSD 4.3 went off without a hitch. (Well, I'm not quite done. The test server is online, but I'll let it run a couple of days before I wipe out the file systems on the real server.)

If there's really a Scripting News dinner two weeks from now in Amsterdam, I might go. It's a long holiday weekend, the weather should be nice, I haven't been to Amsterdam since our honeymoon in 1985, and it's just a 5 hour drive. I'll see if MamaMaus will give me the weekend off. Or maybe she'll come along.