Amsterdam with a small child

That's André and Andrea making sure that Christopher doesn't escape from his stroller. (Actually, when I looked closer at the picture, I noticed that at that very moment they were not watching Christopher, but instead they were being beamed out of the Matrix!)

It was fun to watch Christopher in the city. Amsterdam is a city of narrow, busy streets, and he seemed to be fascinated by all the movement so close to him. And he loved the boats on the canals. At every bridge, he had to watch any boats until they were out of sight. So we felt it our duty to take him on a canal cruise as well. 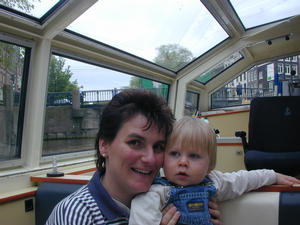 The weekend with him was easier than I expected. I was afraid that he would have problems adjusting to the travel and new environment, but as it was, he adjusted better than either of his parents. We usually plan for Christopher to take about half of our free time on vacation, but I would say this weekend that he took only a third of our time, so we had more free time that I thought we would. But our hands were full enough that we didn't take very many pictures. 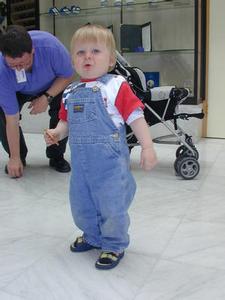 Of course, we need to be able to regularly change diapers. We had no idea where we could find changing rooms, especially during the 3 hours while we were waiting to check into our room, so twice we ended up going to our car simply to change Christopher on the back seat. 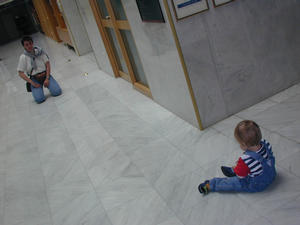 In the hotel room Christopher felt like a king. He had room to move around, played with the telephone, bounced on the king-sized bed, and was able to use the leather chair as a slide. 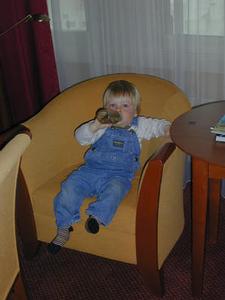