World in a Stupor 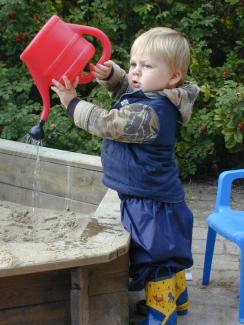 In a milestone that only a parent could appreciate, Christopher barked like a dog for the first time today. He was answering his Barney computer, which makes various animal and machine noises when he pushes the picture buttons. "Woof woof, dog, woof woof", says Barney. "Woof woof", answers Christopher. "Woof woof", chime in Mom and Dad in the background.

Moorbek asks whether the English word "war" is not an exact translation of the the German word "Krieg", since the US seems to be speaking of "war" more lightly than a German would of "Krieg". I guess a "war" takes place far away, while a "Krieg" destroys everything at home.