When You Were Mine 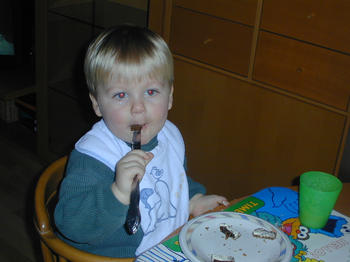 We wanted to show Christopher eating in continental fashion with fork and knife, but by the time we got the camera out, he was eating in pirate fashion with just a knife.

For those of you following Christopher's progress on the troublemaking department, you may recall that a few weeks ago he was able to flush the toilet by himself. Now he's much more sophisticated. He's able to go into the bathroom, pull out two rolls of fresh toilet paper, tear off several meters from each, open the toilet, stuff the torn-off paper into the toilet, and flush. "Puhhhh-tahhhh", as Dave would say.

If Frontier programmers exclaim "Puhhhh-tahhhh" when they get something to work, I guess a Perl programmer would exclaim "She-bang!". (Perl programs usually begin with a line "#!/usr/bin/perl", and first two characters, hash sign/excclamation point, are referred to as 'she' and 'bang'.)