Does This Stuff Come Off? 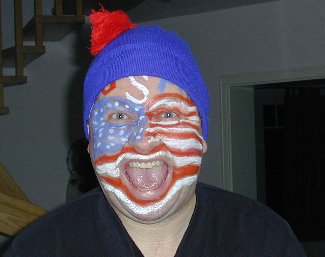 No, this isn't how I prepare for the televised Olympic coverage. We were invited to a 'Fasching' birthday party. I wasn't aware that we would be dressing up until the last minute, and this is what I came up with on short notice. 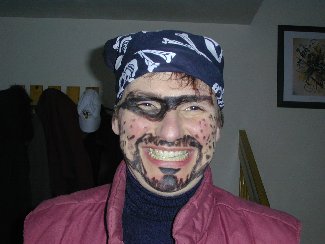 Moorbek had some intresting (albeit cynical) thoughts on the German Olympic success, which I'll loosely translate: "We have two winter sports regions: the Alps and the Walachei in Thürigen (you can't really count the Harz or the Black Forest). There live roughly 80,000 people. The German winter athletes are recruited from these 80,000 people, not from the 80 million German population. The succeses were all in endurance and strength disciplines (cross-country, speed skating). In the technical contests (alpine skiing, ice hockey, figure skating) the results were as usual. In cycling (Ullrich, Zabel), I had always wondered how long the DDR doping advantage would last. This was the wrong question, of course. The question should be, how do the trainers of today keep their athletes from being tested positive? The science of sport learned from German reunification. No proof, of course, but one can't help but notice."