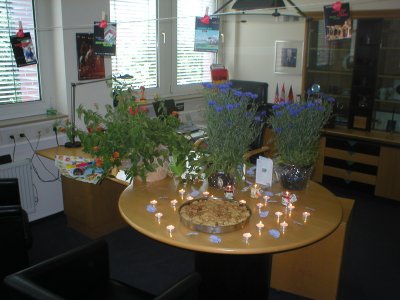 I no longer mention my wife here by name (except as Voldemort, as in she-who-must-not-be-named), but today is her birthday. A very round birthday, as they say in German (meaning it ends with a zero, and in this case, begins with a four), so it is a very special day indeed. Now we've long since decided that giving one another presents is somewhat, well, albern, er, I mean, inane, absurd, daft. After all, we've had a combined bank account for 20 years, so like I'm going to spend her money to buy her something I think she might want. Inane. Absurd. Daft.

I did have to explain to some of her employees, who called me asking for advice, what I think she might want ('well, she likes gardening, she likes reading mysteries by female authors'... as you can see in the picture, they followed my advice), and I didn't think I could simply ignore her very special round birthday. There's always jewelry, you might say, but my taste is nowhere near as good as hers, and I think we'll save the jewelry for the 20-year anniversary coming up this fall. But that is still spending her money to buy her something that I think she might like. Inane, absurd... well, you get the idea.

Then, on our bicycle ride this weekend, I noticed that her bicycle is no longer that new. And she has mentioned a couple of times this year that she would like a new one. She can of course choose her own model and color, but I could take the time and trouble to organize the purchase of a bicycle. So I found a carton about the size of a jewelry box, pasted several bicycle pictures on the inside, folded, sealed and wrapped it.

I think it was a good idea, as she proudly explained to her nephew on the phone that she got a bicycle for her birthday. And tomorrow we'll be going to see Bruce Springsteen here in Hamburg, and that will make us feel 20 years younger. And that's not at all inane, absurd, or daft.