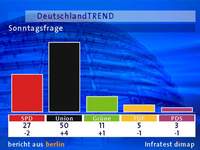 Now opinion polls are just polls and not elections, and elections are 3 years away, but the poll ratings for Chancellor Schröder and the SPD continue to hit new lows. The latest numbers last night on ARD were quite dramatic, reflecting the internal problems Schröder has been having with his left wing and the crest of popularity for Edmund Stoiber and the Union after the Bavarian election. The lowlights for Schröder:

Message to Schröder: 'we don't like what you're doing, and it's your fault'. A few weks ago, I didn't believe the ruling coalition was in any serious mid-term danger. Now I do.