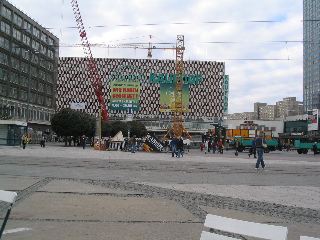 On our first afternoon in Berlin, we didn't hit any of the tourist spots. Instead we went to Alexanderplatz, one of the ugliest spots on the face of the earth. Alexanderplatz was an eyesore even in DDR times, being an epitome of socialist architecture. Nowadays it's not just an eyesore, but dirty, rundown, and under construction. The only redeeming feature is the funky world clock where you can read the time in such places as Pyongyang and Vladivostok.

But it has a special place in our hearts. In April 1985 we were in Germany for our church wedding, and we spent a few days in Berlin to present ourselves to my in-laws, East and West. One afternoon we slipped over to the East by ourselves, and ended up on the patio of a high-rise hotel on Alexanderplatz, drinking beer in the sun at 60 DDR-Pf (about 10 US cents) per 0.5 liter and talking nonsense with some medical school dropout who wanted to somehow move west.

This was our second or third day in East Berlin, and having exchanged for 25 East Marks each day, there was no way we could drink our way through our DDR currency. So we went shopping at the department store, and bought dishes. And a East German flag. And some beer openers, engraved with the price: EVP 0,15. I still have one.

There's still a high-rise hotel, although they don't seem to have a patio with a beer garden. But there's a self-service kiosk with tables outside across the street, next to the world clock. Beer is now 2.20, plus deposit. We stopped for a half an hour, wondered where the past 20 years had gone, and watched the world go by. Noone stopped at our table wanting to move west. 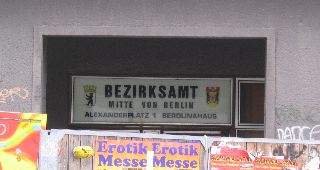