I Want to be a Strong Knight! 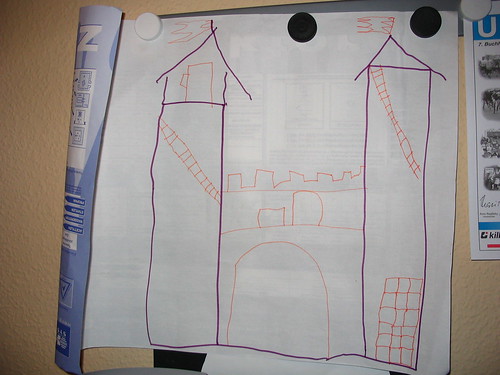 He never speaks this directly to us, or if he does, we're simply too close to him to pick up the message. He and I did have a good laugh the other day. I was reading to him and stumbled over some long German word. I made a funny noise and tried to start over, but he started laughing and I just had to join in. He knew how I felt, and he knew I that knew how he feels.

Our role in his therapy is to let him be strong as much as we can, to create situations where he can feel strong and to try to avoid situations where he feels weak and becomes discouraged. One thing we are trying is sport. The kindergarten suggested that we enroll him in some local afternoon activity to give him contact with other kids, kids not part of the sheltered kindergarten. We thought about art, or music, or a group sport like soccer. But once we heard that he wants to be a strong knight, we decided to follow through on the fighting theme and to try judo. There's a group in Buchholz for 4-6 year olds on Wednesdays.

Christopher was skeptical at first, but now after 4 weeks he's agreed that it's fun to run around on the mats, and to throw and to be thrown. It also helped that we told him that judo is a good sport for astronauts, since that's his current 'what I want to be when I grow up'. We're sure it will help him deal with those verbal cannonballs as well.