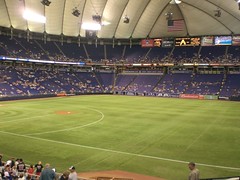 The last few times we've visited the States, a highlight for Christopher has been a baseball game, a visit to the "big stadium", as he puts it. We first took him to see Tampa Bay when he was 3, and a year later he still remembered the stadium when we saw it from the freeway. Of course he mostly enjoys the stadium experience, like hot dogs, ice cream in a mini-helmet, and cotton candy that makes your tongue turn blue. 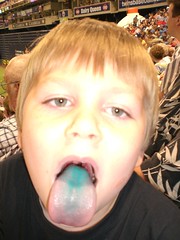 This year we saw the Twins play Cleveland the night before we flew home, sitting behind the visitor's bullpen. Christopher's started to pick up some to pick up some details of the game, and he now has a favorite position, namely catcher. Specifically, the bullpen catcher (so it has nothing to do with the Joe Mauer hype). He was fascinated by the catcher's gear and how he caught the ball and threw it back to the pitcher, and spent an entire inning pantomiming those motions. Good thing the Cleveland bullpen was busy... the Twins won 7-2. 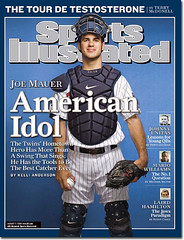 Last night I was checking out baseball highlights (I'm a MLB TV subscriber, and it works much better now on the MacBook now that flip4mac supports Intel). Christopher asked if we could watch some catchers in action. Of course, the highlights tend to show hits and not the catcher catching to ball and throwing it back to the pitcher, so we found a live game (Cubs and Cardinals) so he could cheer every pitch that was not a foul ball or a hit. I tried to explain out the game works (one linguistic problem, when I said the batter was out, he asked whether the game had ended, since in German when a game is "out" it's over). We were talking so much that MamaMaus was wondering whether we were watching baseball or playing it. 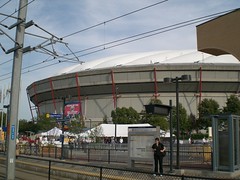 This morning at 3 I woke up and remembered that Johan Santana was pitching against the White Sox, and got up to watch him pitch for a couple of innings. That was a mistake... I ended up watching nearly 2 hours. the Twins blew a 3 run lead, with Nathan giving up 2 run homer in the 9th, but the Twins won in the 11th. No matter what happens today, the "pirahnas" will leave Chicago leading the wild-card race. They're now only 4 games behind Detroit, and since the Tigers seem to be fading, anything can happen before the playoffs. 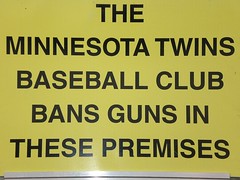 This afternoon Christopher and I are on our way to the big stadium again, this time to watch HSV play Hertha, our first live Bundesliga match. Christopher thinks soccer is nice, but nowhere near as much fun as baseball.