20 km Detour for a Red Light

One of MamaMaus' endearing characteristics is how she takes out her frustrations on her car. I admit, it's annoying at times that when we can't locate our destination, she tends to drive faster, thus making it more difficult to find our bearings, and with her Audi Quattro she can accelerate quite quickly when she's mad. As a result we sometimes get involved in some adventures like we did yesterday afternoon, which I can illustrate with the help of Google Maps for those unfamiliar with the Autobahn layout south of Hamburg. 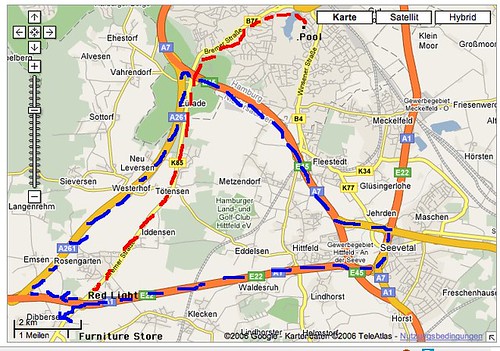 We had taken Christopher to a swim lesson in Harburg (Pool) (it's far from home, but the lessons are flexible), and wanted to make a stop (Furniture Store) to order something on the way home. It was Friday afternoon rush hour, and we knew there was a traffic jam on the A1 heading west to Bremen, so we chose not to take the Autobahn, but rather the side street Bremer Strasse to head to the store (dotted red line). So far so good.

We weren't the only ones with this idea, so there was some traffic on the road. There was also some construction in Iddensen, where they are building a traffic circle to turn off to a garbage dump of all things. So we were later than we wanted to be by the time we reached the intersection with the A1 at Dibbersen (Red Light).

The traffic light had a long red phase. It wouldn't turn green. I don't know if it was extraordinarily long, since I didn't time it, and you don't pull up to a red light expecting to measure how long it takes to turn green. It was at least 3 or 4 minutes. I could hear MamaMaus cursing under her breath, and then somewhat louder. But I didn't suspect what would happen next.

Suddenly she pulled off to the right and onto the onramp for the A1. If she couldn't drive through the red light, she was going to drive around it, I guess. At this point I didn't dare ask her what she was doing, since it would have made her mood worse, and it was too late to stop her anyway. So now we follow the blue line on the map.

I guess she intended to drive to the next exit and turn around, but like I said it was jammed up. So we turn north on to the A261 back to Hamburg. It's clear in our direction, but southbound is jammed for several km leading to the A1. I'm now thinking she'll turn off at Tötensen and take back roads to Dibbersen to avoid the garbage dump and the broken red light. But she shoots on past, and when I ask why she says "I'm not getting back on that road". I then realized what she had in mind.

She was going to circle on the Autobahn all the way around.... from Dibbersen to Marmstorf to Maschen and back to Dibbersen. And that's exactly what we did. I didn't dare say a word, and niether did Christopher.

Ironically, getting off at Dibbersen we turned at the same light that was stuck on red before. The southbound traffic was passing through, and I mentioned something like "oh, the light has changed after all". I didn't get a reply.

Needless to say, by this time all of our moods were fairly sour, and the poor service at the furniture store made them even worse. That pretty much took care of our evening.