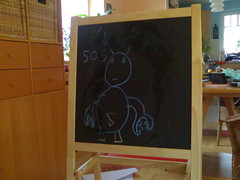 Today John Gruber linked to a profile of John Lasseter, the director of Toy Story and Cars and now chief creative officer at Disney Feature Animation. The undertone of the friction of the Pixar and Disney corporate cultres is interesting, as well as the mention that Chris Sanders, the writer and director of Lilo and Stitch, will be leaving Disney.

That's interesting for us because Lilo and Stitch is Christopher's current obessesion. The TV series is currently on Super RTL, and it's the only show he watches (albeit twice a day) (although as a treat we'll sometimes let him watch Kim Possible). He knows the names and numbers of the 625 experiments, he tries to sing along with the theme song (in Hawaiian), and even has a Stitch plush toy (which we ordered from a E-Bay seller in Hong Kong, since they don't seem to be available at all in Europe).

More interesting is that Christopher an incessant drawer, going through reams of paper (emptying the paper trays of the computer printers), and seems interested in how animation is made. He asked "who invented Lilo and Stitch", so we looked up on Wikipedia and IMDB and found the writers were Chris Sanders and Dean DeBlois. That's how I immediately recognized the name. 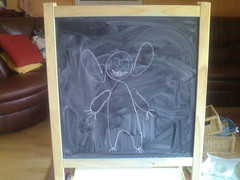 We have no idea whether Christopher has any drawing talent, but he has fun with it. This week we got him an easel at Ikea with a chalkboard and whiteboard, so our paper costs should be reduced drastically, and maybe the paper will stay in our printers. The last episode of the series is being broadcast this week, so maybe he'll have to find a new obsession.