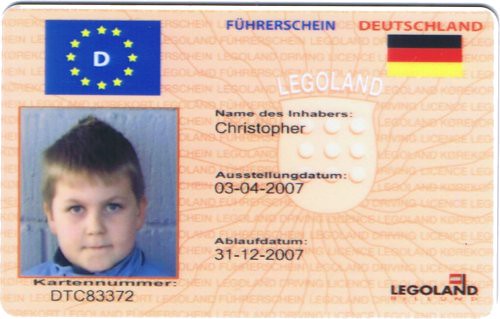 Ever since our first visit to Legoland, Christopher has wanted to complete the Legoland Traffic School and earn his driver's license... however, they only accept applicants age 7 or older. This year Christopher is 7, and (as you can see from the photo set) he attended the Traffic School last week. He now has an official Legoland Driver's License for Germany, even though he ran at least one red light and wrongly signalled most of his turns (he'd signal right, then turn left, or vice versa). Whatever. The back side of the license is a (fake) StatOil credit card, and they just happen to be the main sponsor of the Traffic School. Good thing we don't have any StatOil stations in Germany.

Previous Post: Founding the Business Next Post: Rails is an ogre, and ogres have layers
comments powered by Disqus