Last December at one of MamaMaus' meetings in Munich all mid-managers got a heavy box approximately 50 cm on all sides (like a Dell box folded in half). She didn't even try to take it on the plane with her, she had it shipped to her office. Then it barely fit in her car to bring home. It was a Christmas present, a full-automatic Jura Impressa XF50 espresso machine. 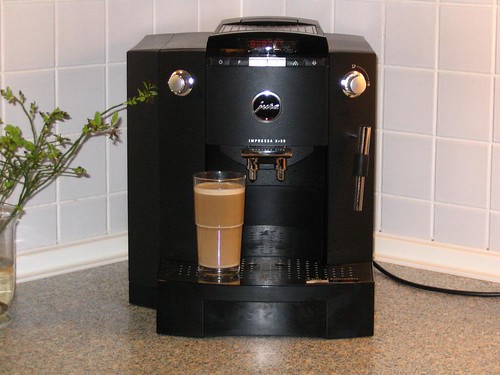 It's a commercial machine, just like the retail F50 but in black. What we used to lovingly assemble, brew and clean every day was now available at the touch of a button. We got used to the convenience rather quickly. Our daily joke in the morning is now "Can I make you a cup of coffee". Since it's absolutely no effort anymore, it's not that much of a favor.

It's quite large, luckily we have a dead corner on the kitchen counter that it fills up quite nicely. We were afraid that it would be as hard to set up as a video recorder, but it was actually quite easy, and once set up you can pretty much forget it. It even shuts itself off when it's not been used for a few hours. Just do what the screen tells you to do. Fill water, fill beans, empty tray (for water and used grounds). You'll want to rinse out the tray daily, though, if you don't want nasties to grow in it. We use the optional water filters, so we don't have to decalc, instead changing the filter every 2 months. The screen even tells you when to clean. We've done that twice since Christmas, dropping in a tablet and running water through. The filters and tablets are not that expensive, you can get them at Media Markt or on eBay.

After 4 months with the Jura we're quite happy with it. We still probably wouldn't spend the 800 on it ourselves, but it's a nice luxury to have, and we would miss it if we now had to do without.