Uncle Tom in the 21st Century 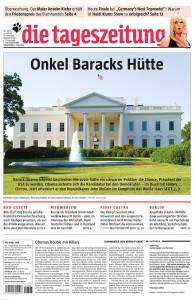 So is the Tageszeitung's "Uncle Barack's Cabin" headline today stupidly racist, or just racist? "Uncle Tom" has been an insult for, what, a century and a half now?

Update: An opposing view (in German) from Markus Tripp (who I follow on Twitter), who links to the discussion at tazblog, the newspaper's own blog.