We thought we'd be nice to Christopher and let him decide what he wanted for supper last night. He thought long and hard, about 20 minutes, then told us he wanted his favorite meal, crab legs!

He's had crab several times in the States, most notably at Crabby Bill's in Florida. However, we have no idea where to find crab in Germany. No restaurant we know of serves it. Last night he had to settle for shrimp cocktail and shrimp soup from our local Greek restaurant. However, he did take the time to tell us with pencil and paper what he really wanted. 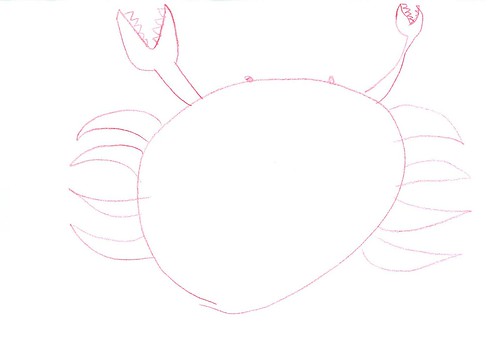 However, we knew the Metro cash-and-carry store has a huge seafood department, and we promised him we would look there today. And sure enough, while they didn't have any crab legs, they did have a 1-lb whole frozen fully cooked Irish crab. 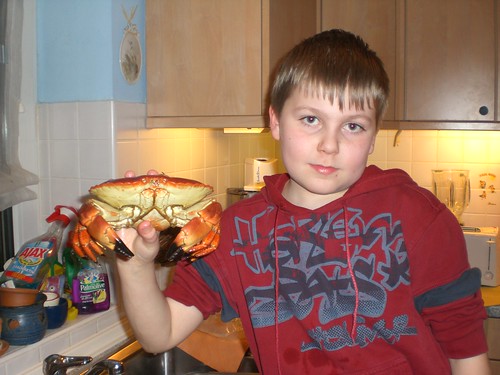 We've never prepared any type of crab at home, and had no idea how long to thaw it out. Looking on the internet, I found recommendations to let it thaw overnight, but that surely wouldn't do for the impatient Christopher. We left it it cold water for 2 hours, then boiled it for 5 minutes. 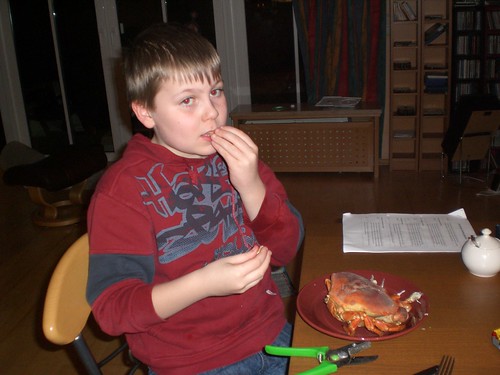 We also do not have the proper utensils for eating crab, so yes, that is a garden shears that he used to crack open the legs. He said the crab tasted as good as he remembers from Florida.

We will think twice, though, before we ask him again what he would like for supper.