In a moment of weakness after a week of working middle-shifts, Frauke agreed to take Christopher for an outing this past weekend... only after promising the trip did she see where he wanted to go: to a demonstration in Hannover against policy of the current education ministry. That's a cause we can agree with, but taking up an entire Saturday with a bus trip to Hannover? And, yes, Christopher insisted on taking the bus. 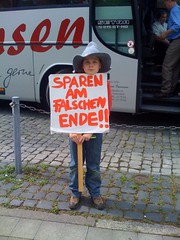 I was not in on the promise, having taken the time to read the fine print. I did however bring to two of them to the bus pick-up point at 9:30 Saturday morning. We managed to get Christopher to compromise on taking the bus there, but to take the train back.

And they had a good crowd. 10000 demonstrators (mostly teachers and students) protested plans to impose a shortened Abitur in the "Gesamtschule" (combined schools, like we hope to have built in Jesteburg) and the general lack of funding for education. 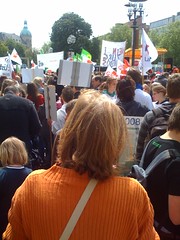 Frauke and Christopher skipped out after two hours, eating lunch at McDonald's amd taking the ICE back home. They were back by 4 pm, giving Christopher plenty of time to mow the lawn before dark and letting Frauke relax a little bit on her day off and enjoy an outdoor cook-out by yours truly.

The following day was Mother's Day, and Frauke celebrated by doing something she loves... planting flowers, in this case at her restaurant at Hamburg Winsener Strasse.