On our way home from Minnesota, we stopped for two nights in New York. That was my first time there, excepting a trip when I was 20 and took a Greyhound bus for 2 days from Minneapolis. That's not an experience I care to remember or repeat. As first timers for a weekend, we hit the standard tourist spots... Times Square, Empire State Building, and (especially for Christopher) the American Museum of Natural History.

We were however lucky enough to get Crown Tickets for the Statue of Liberty. The Crown was just re-opened to visitors on July 4th, and we were there a week later on July 11th. We were able to order tickets online the first day they went on sale. We were lucky. Only 30 people are allowed in the crown each hour. Right now, Crown Tickets are sold out through October and no Saturdays are available until December 5. Crown access costs $3 in addition to normal admission and ferry fare.

The hitch is that the crown is only accessible by staircase, with 354 steps. The staircase spirals and is a bit tight at the end. Children must be at least 4 feet tall and able to climb the stairs by themselves.

The tickets can't be printed out online, you need to pick them up at the will call window. We were worried about long lines, so we arrived at noon, 2 hours ahead of our scheduled time. That was way too early... there was no line at will call, and the waiting time for reserve tickets was just 15 minutes (those without reserve tickets were waiting 90 minutes). We hung out for an hour in Battery Park, enjoying a microbrew from the Picnick kiosk while Christopher explored the musical sculptures.

We then joined the horde for the ferries, which were much like the Hadag commuter ferries in Hamburg harbor except for the airport-style security screening. Once on Liberty Island, we separated from the horde to head to the info booth to show our official ID and pick up wrist bands and instructions for the crown. The instructions were basically "ask the rangers along the way where to go next". No bags or backpacks are allowed, so we had to lock those up. There's another security screening (this time with a puffer machine).

We entered the monument and were told to go straight on up the stairs. I lost count at 200, but the climb was easier than I imagined. There were a couple of rangers posted along the way to offer encouragement, but suddenly, there we were. Two rangers were at the top, and together with them for several minutes were alone on top of the world. 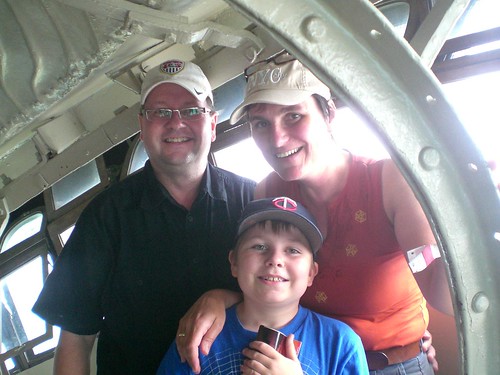 We could feel the statue swaying slightly in the wind, and could see the torch moving back and forth. The day was relatively cool, so it was comfortable inside. Christopher asked the rangers about going into the torch... they told him it's been closed since 1916, when German saboteurs blew up a weapons depot on the Jersey side, and the shock waves slightly tilted the torch arm.

In short, if you can plan enough ahead to get the tickets, the climb to the crown is well worth it!