Next weekend we are finally celebrating our silver wedding anniversary. As you may recall, the actual anniversary was in September 2008. So in the spirit of procrastination, the event is entitled "Twenty-Five Plus". 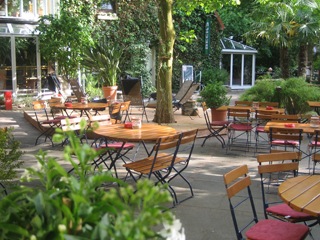 We both have memories of stiff and boring anniversaries that we were forced to endure as children, so we are trying to do the opposite. We'll be at one of our favorite restaurants, the Treibhaus in Marxen, which as the name implies is very green and casual. We're serving "American Barbeque", outside if the weather allows. We're celebrating in the afternoon and will be done by sunset, not partying into the wee hours of the night morning.

We have two special visitors from the States, my mother and my cousin. My cousin has never been to Germany, so we will also be conducting a whirlwind "German essentials in 6 days" tour concluding with a cruise on the Rhine (special request from my mother). Our son has a class trip all next weeks, so that fits.

We've also been able bring our "Basement Project 2009" to a belated tentative conclusion. We had hoped to have business storage space and a guest room with bath done last winter, but the bad weather put us back and, well, the painter just finished up last week. The business space still needs some electrical work and shelving, but we made a trip to Ikea yesterday, and Voila! The guest room is now livable!

So now my project is to create a "25+ Playlist" of early '80s music for our Sonos S5 with which to entertain (or possibly torment) our guests. Can you sing along to "Like A Virgin"?

Previous Post: There and Back Again Next Post: It Was Twenty Years Ago Today
comments powered by Disqus