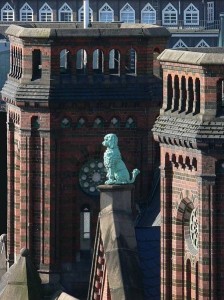 I promised to explain the poodle.

Last weekend the 5th annual Whiney Expat Blogger Meet-Up was held in Hamburg. Tradition holds that once a date and location are decided (by democratic vote in a process somewhat similar in length and complexity to choosing a US presidential candidate), the local bloggers, in this case Ian, No Apathy Allowed, Transkitten and I, plan the weekend. Over the years a successful formula for the weekend has evolved: a side-trip on Friday, dinner Friday evening, a walking tour Saturday morning followed by lunch, disco nap in the afternoon, dinner and (gay) bar hopping Saturday night, and brunch on Sunday.

This year for walking tour we called in professional help, an excellent decision since even we natives learned new things about the most beautiful city in the world (as the city is modestly referred to by its residents). Something new for us all was the poodle. The shipping magnate Carl Laeisz placed the poodle atop his company's headquarters, the Laeiszhof on the Nikolaifleet in honor of his wife, whose nickname was "poodle". He even gave all his ships names beginning with "P", a tradition the company continues to this day.

The women in the group all agreed that they wished their men would similarly honor them, and the poodle became the official mascot of the weekend. One of them even took to giving commands as the poodle in the third person, as in "The poodle demands your attention", "The poodle is not amused", until finally, at the end of the evening, "The poodle has left the building".

Alas, for me the honor would be counter-productive, as I would have to erect and statue of a mouse atop our restaurants, and as the move Ratatouille shows, rodents and gastronomy do not mix.