One of the several good effects of our son's new school is that he has developed an enthusiasm for music. We didn't take him to any special music classes earlier (it's something we didn't think of, since neither of us did it as kids, maybe that was a missed opportunity), but with his very first music class at the new school, he decided he it was time to learn an instrument. One of his music teachers offers weekly after-school keyboard lessons, and our son was the first to sign up.

(After school means he misses the bus home and we have to pick him up. Remember the school is a 45 minute drive from our home. Calculate how much fuel we burn to foster his interest in music. When I complain about my Friday taxi-driving schedule, this is what I mean.)

After a couple of months of lessons, he outgrew the cheapy keyboard from the supermarket, so armed with some birthday money from Grandma we invested in a Yamaha E223 keyboard... still low-end, but much better than what we had.

And while we were at the music store (Musik Markt Hamburg, by the way), I decided to scratch an itch I've had for a while. I haven't done anything with music for 30 years, since playing bass clarinet in the high school band. I really enjoyed it then, and seeing how our son is having so much fun with it, I thought maybe I could get back into it...

So I bought a bass guitar and an amp. Here we are showing of our new instruments. 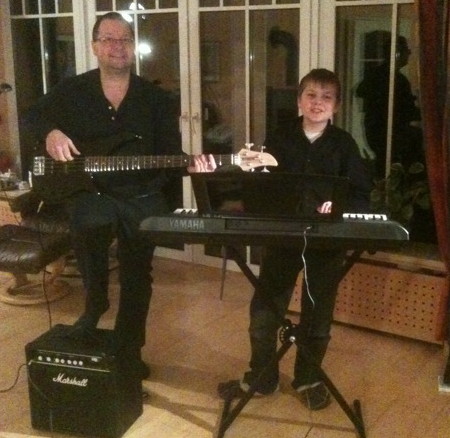 My sister-in-law's response: is there anything black left on the shelves? (Yes, I'm color-blind, and I am invariably attracted to black. It's the only color I'm sure I see correctly. And if it were red it would be a midlife crisis.)

The bass is a Yamaha RBX170, a decent and versatile beginners' bass, with a Marshall MBB15 amp, which is enough to practice in the basement. My knowledge of bass is starting from zero, and so far I've learned the strings are E-A-D-G and that I'll have to hang weights on my left-hand fingers to get them to stretch enough to cover four frets. I have a couple of books, and can still read music, so we'll see how far I can get by myself.

Meanwhile our son is trying to follow along to Beethoven (Ode to Joy and Für Elise), listens to The Four Seasons, and insisted we get tickets to a tour of The Magic Flute when it comes to Buchholz next month.

And he says he's ready to start a second instrument. The violin.