We've been keeping a secret for the past several months, and it can now finally be revealed. 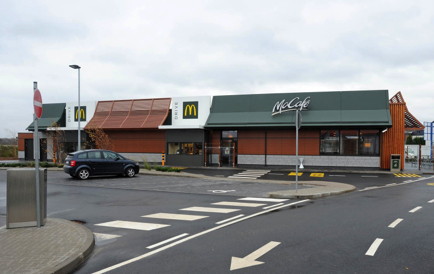 We're pleased to announce that construction has begun for our 4th McDonald's restaurant! It will be located on the Autobahn A1 at Rade, the first exit from Hamburg heading towards Bremen. We expect to open at the end of June. 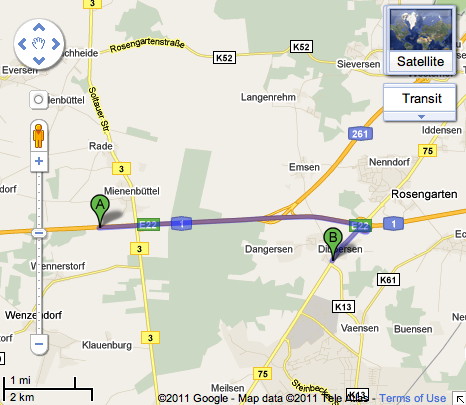 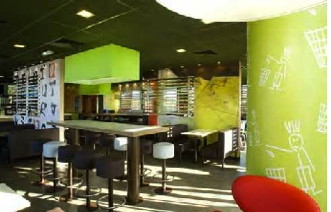 The restaurant with McCafé will be part of an Autohof, a truck stop and gas station, and our logo will appear on official Autobahn signage leading to the Autohof. Over 70,000 cars per day pass Rade on the Autobahn. It also fills a hole in the McDonald's map. From the west, the nearest restaurant is at Bockel, 44 km away. To the east, our restaurant at Dibbersen is less than 8 km away, but with the Autobahn crossing "Buchholzer Dreieck" between the two stores, they have completely different traffic patterns. Traffic from the Elbtunnel heading south drive past Rade, but not Dibbersen.

We'll be part of the LogPark Hamburg, a logistics center currently under construction on both sides of the Autobahn. We'll be located alongside the eastbound lane before the exit, so we'll be impossible to miss. We won't need an overly large sign to be visible from 2 km away. 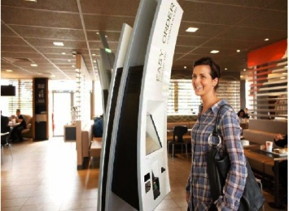 The current standard building type in Germany features a green exterior with wood trim and all the latest energy-saving innovations. We've chosen a colorful "LIM Fresh" interior for an expected 130 seats inside and 70 seats outside. Among the extras we've chosen are touch-screen "Easy Order" kiosks to enable guests to enter and pay for their orders before coming to the counter. 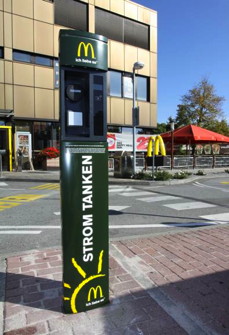 A special innovation will the charging station for electric vehicles, only the 5th of its kind at German McDonald's. You'll be able to charge your battery with eco-power while enjoying your meal. We'll be adding an electric car to our company fleet. With a top speed of 100 kmh and a range of 130 km, it should be perfect for driving between our 4 restaurants.

We've been discussing the site with McDonald's for over a year, and we're very happy that we'll be open for the entire school vacation season this summer. The Autohof won't be completed until this fall, so things will be a bit dusty for the first few months. Right now we have the first big challenge: finding 70 new employees in a booming economy to be set to open in 10 weeks. Wish us luck!