Forgive me, readers, for I have sinned. It's been over five weeks since my last post

Our summer "vacation" was a busy as we suspected it would be. The restaurant in Rade, the truck stop store without a truck stop, is as busy as we hoped it would be. The self-serve "Easy Order" kiosks are in but are not being frequented that much yet (around 3% of guests). I suspect most people walk by not knowing what they are. Our first store in Dibbersen has been holding its own, down just a bit from last year despite having the brand new store just a few km away.

However it was our store in Harburg that gave us the nicest surprise. A couple of weeks ago we found our neighboring Burger King had subtly changed. 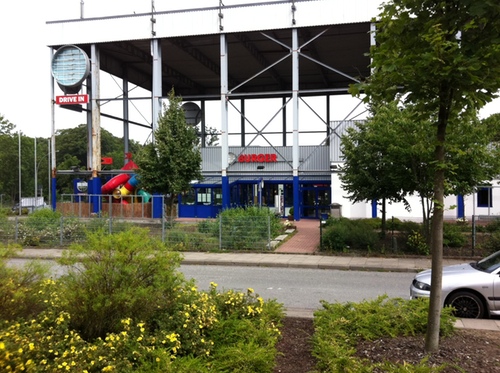 It had become a non-Burger King. Apparently BK had cancelled their franchise. The restaurant is still open as a generic burger joint, but it doesn't look open and we're getting a surprise plus. Now we just need to get staffed to match.

Meanwhile we had sent our son to my parents in Minnesota for 3 weeks, after the success of his Easter voyage. He arrived just at the peak of the heat wave (110°F), but it was cooler at the lake and he pretty much caught all the sunfish he could get (final count over 60). I flew over for the last few days of his visit to catch up with my folks and bring him home. It was nice to get a couple of days of sanity time.

Today school starts, our son is in the 6th grade, and our schedule gets back to "normal", whatever normal turns out to be this fall.