For my 50th birthday, I decided to splurge a bit on my present. After all, you only turn 50 once (although admittedly one could say the same for 49 or 51). I decided to get myself a fancy DVD player. 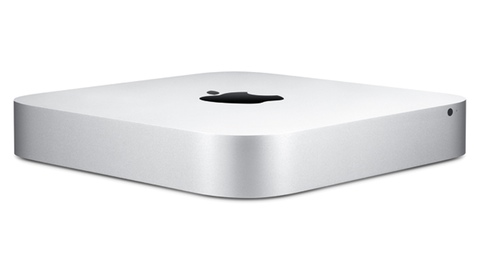 As you notice, it's not really a DVD player. For one thing, there's no place to insert a DVD. For another, it's actually a MacMini computer with full HDMI output.

I had made a couple of attempts before to attach a media player to our TV. The latest attempt was a WD TV Live, to which you attach an external hard disk or connect to network shares. The user interface leaves much to be desired, and networking for us (over a powerline interface) worked hit or miss at best.

The monkey wrench in the works is that we still have an analog TV, a 10-year-old 32" Samsung I can barely lift. We're going to renovate our living room Real Soon Now™ (first intended for 2010, now possibly in 2014), and we'll get a new TV when we have that done. The Samsung has only 2 SCART inputs, which makes attaching multiple devices rather difficult. Given the analog TV, the HDMI output goes to waste (for now). All our video is standard definition, anyway, so attaching a HDMI-to-analog converter doesn't degrade anything.

A pleasant surprise with the Mac Mini is that networking over powerline works just fine. I can control it from my MacBookPro with Remote Desktop, it can stream files from elsewhere on our home network just fine, I can rip DVDs to it from other computers or start Handbrake on it to convert ripped DVDs to more useful formats. To start movies in the living room we've got a Harmony One remote that can be paired with the Mac Mini.

As for the software, I knew in advance I'd be wanting Plex, which is so cool I'll be writing a whole separate post about that.

Update: There are a number of good tutorials on setting up a Mac Mini Meia Center. For me a good starting point was the Mac Mini Media Center Project series by Youseph Tanha.