Today the Bundestag commemorated the 60th anniversary of the June 17th workers' uprising in East Germany in 1953. President Gauck spoke, linking the uprising then with the struggles for freedom throughout the world today, but the ceremony has merited only a brief mention in the German media. Ten years ago I blogged about a documentary on the uprising which impresses me even today, particularly this photo. 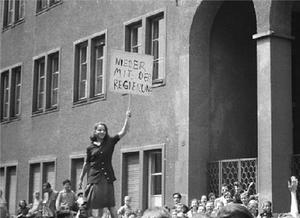 Helden ohne Ruhm is a fascinating documentary of the 1953 uprising shown in ARD last night. It features interviews with demonstrators, VoPos, Soviet soldiers, and widows. It's being rerun tonight (RBB) and tomorrow (SWR) if you missed it. The photo is from newly discovered footage from Leipzig. The girl holding the sign was imprisoned until 1962.