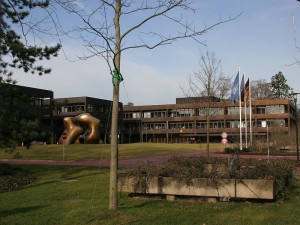 All the talk of the "NSA Affair" in Germany reminds of a time when we were definitely spied upon by the German government.

In the early '90s we were visiting a relative in Bonn, which was still the German capital. We were exploring the government district and were admiring the Bundeskanzleramt, the Chancellor's office, occupied at the time by Helmut Kohl. We were outside the entrance gate, and behind the Bundeskanzleramt was an office building with the distinctive 3-pointed Mercedes star.

One of us mentioned how utterly appropriate it was that a symbol of German industry was looking down upon the Chancellor's office when suddenly the loudspeaker on the gate crackled.

"The Star of Bethlehem."

That was the absolute highlight of our trip to Bonn.