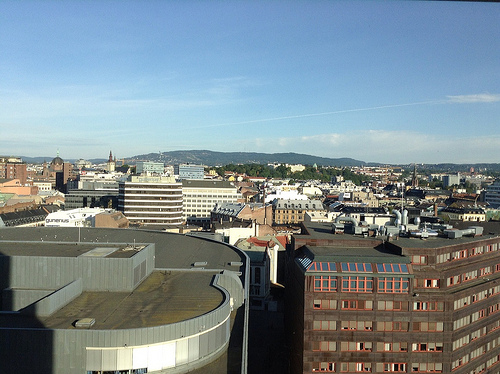 We managed to return from our weekend and to escape without any long-term repercussions, so I'm sure it's safe to reveal where our destination. For the occasion of our 30th wedding anniversary, we took the ferry from Kiel and spent the weekend in Oslo!

Some of you will now ask us, "Hold on, isn't that the exact same destination you had for your 25th wedding anniversary?"

Well, yes, 5 years ago we also took the ferry to Oslo. But it wasn't exactly the same the last time. For one, this time we stayed overnight, at the lovely Radisson Blu Plaza, a hotel that is, well, tall, with a lovely view of the Oslo skyline.

For another, we took a bicycle tour though the city with Viking Biking, which was the perfect way to spend the afternoon, especially as the weather was nearly perfect (5 years ago it was cool and cloudy). It was very pleasant, low-key (central Oslo is relatively flat) and entertaining, and the tour highly deserves its high rating on Trip Advisor.

And finally, we treated ourselves to a 5-star cabin, and booked a separate cabin for our son. He could be Mr. Independent on the ship, while we had some time for ourselves.

Just to make us feel old, there was a concert by Soundgarden next door to our hotel. We were born 10 years too early to appreciate them, and our hotel was full of nostalgic 40-something fans all younger than us. Happy Anniversary!