PapaScott Savin' it up for Friday night 🥁

My wife Frauke and I were going to have big plans for this evening. It's Valentine's Day, of course, but not only that, it's the 40th anniversary of our first date!

The thing is, we're not really sure about the date. 😀 Let's face it, this was 40 years ago, and at this point even last week is a blur. At least for me, I have to turn to the calendar for February 1980. 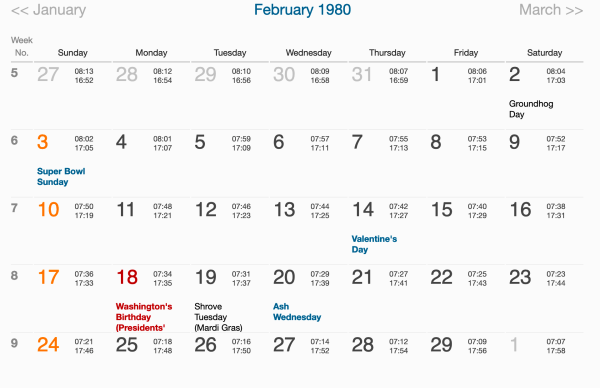 We were in Minnesota, I was a senior in high school, and Frauke was an AFS exchange student in a neighboring town. I had been an AFS student as well, and in early February our local AFS club held an open house for neighboring AFS students. So she and a few other exchange students were at our house, and let's just say we both noticed one another.

This must have been the weekend of the 8th and 9th, since the 9th was my 18th birthday and I remember the open house being close to that.

After that, we were lucky enough that local high school basketball tournaments (both boys and girls) were starting up, and our schools tended to play at the same location, and both tended to advance. So at least 3 or 4 times Frauke and I were able to meet on the bleachers at basketball games.

But when was that exactly? If memory serves, tournament games tended to be on Thursdays and Saturdays, so the first one could have been on Thursday, the 14th. Or maybe not.

A week later on the 22nd was the Miracle on Ice, a big event in Minnesota in 1980. We must have "dated" before that, because I remember thinking of her at the time. Anyway, after 2 or 3 weeks both basketball tournaments were over, and we had to go on an actual date with just the two of us. That was a movie, Moonraker.

And that brings us to today. As I said, we were going to have big plans for the evening, but it turned out Frauke has a business trip with an indeterminate end. Even if she does get home early, we have no plans. Maybe we can find a basketball game.